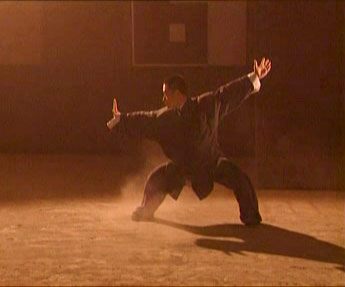 Baji fist is one of the northern DuanDafist styles taught by our Shaolin Chinese martial arts masters, and it is also called “KaimenBajiQuan”, “Baji Fist,” “Bazi Fist,” and “Zuoshaxing.”Most agree it originated from the Hui-people of Cang County in the Hebei province. Its first generations of descendants came from the martial artist,Wuzhong, who lived in the beginning of the Qing dynasty.Baji fist is closely connected with the military system, and it has been used for “imperial martial arts,”specifically protecting politicians in modern history. It is very popular nowadays in Northern China and Taipei and has also been introduced abroad in Japan,Korea,France,India,America, and Canada. It was chosen as one of the first batches of National Intangible Cultural Heritage in 2010. .

These are some pictures of Baji training at school,click here to see more :

Baji fist came from a great but strange man, called Lai, who was skilled in martial arts in the beginning of Qing emperor-Yongzheng( 1478-1735).Wuzhong, who came from Cang County of Heibei province, was educated in many schools andlearn extensively from his master, which he would use to create Baji fist. He single handedly attacked the Southern Shaolin temple and won.His abilities were superior to that of the imperial lord(Yinti), and he was known to everyone, so he built his own style. Wuzhong, born in 52nd year of Qing Emperor Kangxi, died in 7th year of Qing EmperorJ iaqing..

“Baji” refers to eight very distant places as the hands can reach as far as possible because they move around all sides.“Kaimen” has four meanings: The first is to be independent and unique. The second is to take in disciples and communication. The third is particularly about 6 "Kai"and 8 "Hitting-Forms", (6 "Kai" refers to DING, BAO, TI, KUA, Chan and Dan), both of which have the ability to create power in 3 forms: creation, explosion and invulnerability. The fourth is to be enlightened to realize the truth.

“Baji fist” style has unique characteristic as a martial art: simple moves, aggressive and explosive force, violent ups and downs, powerful extension and various movements. Its power is violent, made by Qi, and with “ heng、ha” sounds. Baji movements can be described like the the tense bow, exploding like a bomb, moving the whole body, as quick as lightening and with conformity of power stomping、twisting、colliding. Contact is usually close to the body, giving off a natural threat. Moves imitate ten kinds of animals like dragon, tiger, bear, deer, monkey, big bird, rooster, crane, camel and snake; power come from ten moves like DOU, SUO, LENG,HAN,LUE,BENG,CHENG,TING,SHU,HENG. It was formally authorized as one of ten Chinese splendid fist styles by National Sports Committee and Chinese Martial Arts Experts Association in 1997. In Baji Quan, head and feet connect Qian( sky) and Kun (ground). Shoulder, knee, elbow and hip face to four directions. Arms are separated back and forth by symmetry, holding Qi in middle Dan tian. Make Qi with mind and drive power with Qi, integrate the hands and feet, integrate the knees and elbows, integrate the hips and shoulders, integrate mind and will, integrate will and Qi, integrate Qi and force. It has furious and fierce power, which is swift, flexible, changeable and mysterious. Baji fist pays a lot of attention to attack and defense techniques. And for its application, it speaks of  “Ai、Bang、Ji、Kao，making use of every bit of time, defending and attacking at the same time.

Baji fist style belongs to “DuanDa” fist. Its movements are very aggressive. In regards to techniques, it suggests blocking and grabbing explosively, and hitting powerfully. The power originates from the heel, goes through to waist, and makes its way all the way to the finger tipsfor attack and defense moves. Because the movements are very aggressive and explosive, a saying in Chinese folklore says: it is Yin and Yang Taichi culture that guarantees the universal peace, and it is Baji fist that stabilize Qian and Kun.

Baji is not only famous for its aggressive techniques, but also for its close quarter’s combat application. The most famous one is “TIE SHAN KAO” (push with body close to). When practicing “TIE SHAN KAO”, Baji disciples usually use their body to hit the wall, trees, and logs. The key point of it is to get close to an opponent, as close as kissing someone, and then hitting him with the shoulder. While one might think the power comes from the shoulder, it actually comes from the twisting power of the waist and hip. This movement can do great harm to people when done correctly.Also, there is a very important Baji kick, which is called “CUO TI” (rubbing kick). Doing Baji fist is like walking under the mud, kick lower than the knees. “CUO TI” can just embody this character, it requires that foot step under the opponent’s knee, and the foot is the best part to land. So this kick is not as destructive as other kicks, but it mainly aims at breaking the opponent’s balance, achieving the efficiency of beating him down with less power but more technique.

Additionally, Bajiis one of the fists that pay attention to the combination of normal training and sparring.. With its great practical value, some characteristics are adopted by military and armed policemen when practicing Qinna, take downs, and combat.

There are nine requirements for body gesture, as listed below:

2. Relax shoulder and keep Qi down

3. To be straight externally and to be round internally

6. Improve the coordination of the feet and hands

7. Let the Qi go through the power

The basic rules for Baji's attack include the following: don’t move until the opponent starts moving. If the opponent moves, we use hands as the temptation to lure other people to move. And then, we keep attacking and breaking through the opponent’s guard. With this simple philosophy, we can beat the opponent. .

Here are the basic techniques for Baji fist: for the upper body, we should hit it slightly. For the middle body, we do “AI、BANG, JI, KAO.” For the lower body, we control and try breaking the balance. It is particularly about attacking continuously with the whole body. For the higher attack, we don’t block with “CHAN”; for the middle and lower attack, we don’t defend with blocking upward. We ignore right and left punches and pay more attention to the middle punch. We step backward rather than stepping forward and give a kick once stepping forward. We attack once moving, trying to keep stable once stepping backward. We keep guard the front side of body, kick effectively anytime, maintain eye movement, and keep punching at different parts.