Repave the road in front of academy

In order to offer best Kung Fu Training environment,we invested and repaved all the road in front of school gate and the Yard inside academy.

● On Dec 24,2014,Christmas and new year is coming,Merry Christmas & Happy New Year.Our students had a great dinner with school masters to celebrate this holiday,and each of you got a gift from academy.

Looking back this year 2014,it is unforgettable and amazing.We finished all kinds of training task successfully,(Got more than 20 returning students include family groups with positive reviews),and we will continue to improve our academy, furthermore,our students attended seven big traditional competitions(include held by Hongkong, Beijing, Dalian Yantai) and achieved excellent records.Thank you for all students supports and efforts.Best wishes in 2015 and hope everybody show more love and may it bring health and the best of luck for you and your family.

●  In order to offer more comfortable living room for students,the new accommodation building are under construction,then,the new building for students living room will be single room with independent bathroom and western toilet for each room,and will complete in 2016.See More.

● In July 28 and August 8,2014 ,we arranged students to participate the International traditional Shaolin compeition in Yantai city  respectively twice.(Yantai city is the city we located),and got very good records.See More.

● In May ,we will join the traditional Martial arts competition held by Muping of Yantai city.

● In May 1,Chinese Labour Day,Some of students and masters to take part in the kung fu performance held by Kunyu mountain and finished successfully.

● In April,We added a New shaolin master and another new teacher who are highly skilled at acupuncture and massage,and inherit them.

●In February,We added a New Older master with many years teaching experiences,he focus on teaching Mantis Boxing,Bagua and Xingyi Chuan.

●On Dec 24,Christmas and new year is coming,here,we'd like to send best wishes,Merry Christmas & Happy New Year.Thank you for all support and caring for Kunyu Mountain Shaolin Martial Arts Academy.

●  This year we are dedicating to improve our teaching and students training environment,and received lots of positive reviews from our students,and students got excellent recordes from several traditional shaolin kung fu competitions we attended.

●  In Christmas Eve and new year,all the school staff and students will celebrate Christmas together and have a great dinner.

● In Oct to Nov 2013,the school participated Shaolin international Martial arts Festival in Los Angeles of USA.If the students (as well as previous students) wants to join,please contact with us. School Email : academy@chinashaolins.com

● In Sep 2013,the school held the big kung fu performance by Chinese masters and some students of Kunyu mountain Shaolin kung fu academy which held every year,and finished successfully.See More.

● May 2013,school masters and some of the students performed Chinese martial arts for "Spring Outing Festival "that held by Kunyu mountain Taoism Temple we located.

● School Staff and students donated more than 8000 RMB to show love heart and support for the earthquake areas in southern China SiChuan province in 2013 April.

In end of May ,some students performed in the traditional Martial arts Festival in Horse Land held by Muping district of Yantai city. 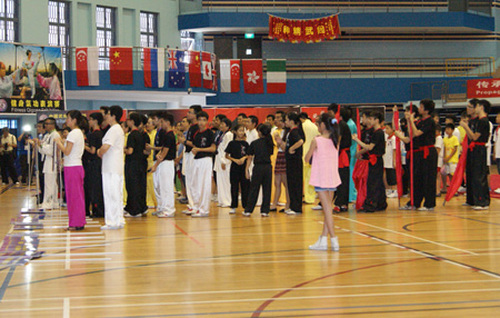 In 2013,Invited to be a Judge in International Shaolin martial arts competition.

In August 2013,our Master was invited International Shaolin martial arts competition in Singapore as Judge.

Donate fund to the people in need