● On Dec 24,2016,Christmas and new year 2017 is coming ,Merry Christmas & Happy New Year.We celebrated with students and have a great feast together,and we prepared a gift for the students who spent Christmas here.

It is amazing year for 2016 and we finished all the training program and  several big competitions successfully with great scores.Thank you for all students supports and efforts.

In April 2016,our Our Kunyu mountain shaolin academy is awarded as Advanced Excellent School by Sports Educational Bureau of Yantai city for Five consecutive years from 2011 to 2016 Year.

●In Oct 2016,We participated the performance of international Exhibition of Yantai ctiy .

●From May 9 to May 15 of 2016,the group of American school branch in China returned to train again,they benefited a lot from Chinese culture and traditional Shaolin kung fu.

● On Dec 24 2015,All school staff and masters of kunyu mountain spent a great dinner with the students to celebrate a brilliant and happy Christmas Days.

● In May,the school staff and students donated more than 3000 RMB for Nepal earthquake.

●The new year 2016 is coming ,all the school staff would like to send best wishes, Merry Christmas & Happy New Year to you and your loved ones, we hope you have a most happy and prosperous New Year. 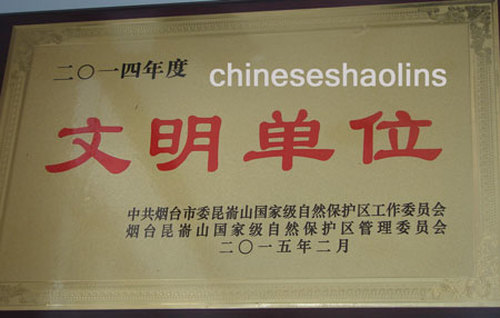 ●In February 2015,we are awarded as "Advanced school in spiritual and cultural progress" honorary title by the local government for many times,see the photo below:

We built a new accommodation building with single or double room with independent bathroom and western toilet for each room,and completed in 2016.

In July 2016,some of students and masters performed amazing Shaolin martial arts in academy.We perform each July to celebrate the school anniversary.

In May 2016,We took part in the third time Chinese Martial arts Comptition in Horse Island of Yantai City invited by The Cup of "Long Quan Yu Gate" (Horse Island is very famous in Shandong Province with long history and culture) .

In April 2016,our students took part in the large-scale public welfare Love activities "Raise the sun of tomorrow" held by volunteer of Hua Ting book academy in Yantai city.

On September 16 and 17,2015,About 30 students and masters of kunyu academy attended the “Fujing Agriculture Cup” of the international Martial arts Championship of Qingdao city to compete,and achieved excellent records of 12 gold medal and 6 silver medal and 7 bronze medal

On August 8th,2015,our students achieved 20 gold medal and one silver medal in the Traditional shaolin martial arts academy in Yantai city, besides,our student got a championship in a Chinese kickboxing competition.

On March 28 2015,our students achieved 10 gold medal and 9 silver medal and 2 bronze medal in traditional shaolin kungfu,Wing Chun,Tai Chi & Baji in the International Chinese Martial Arts Competitions in Hongkong,the beauty of the Pearl of the Orient.That is the third time to participate.