Ten months course from Aug 2014 to June 2015
Hannah Pszenica          (USA)
I wanted to learn Kungfu in China because that is where Kungfu is form. Kungfu is a large part of the culture, and unlike for most people in western countries it is a lifestyle, instead of just a hobby. I wanted to learn Kungfu because it is historical, really clever and interesting, connected with nature and the world, and powerful and beautiful. I was not really interested in any any of the optional classes, but from training I gained strength, flexibility, coordination, memory and the knowledge of what to do in various situations. I really love all of the forms I learned and the training in general.

From living in the academy I learned how about Chinese culture and living in a community. From grading and competitions, I learned how to perform in front of people, which at the beginning was very difficult. There have been many people who have influenced and helped me. Thank you very much to my teacher, Master Xu, as well as all of the other masters and translators. All of the masters and other students have also been really great people, and it is amazing and inspiring to see old students. in general the school is a really good place to meet people from all over the world with similar interests. The living conditions and the food are both not bad, and the surroundings are beautiful. Muping and Yantai are both nice to go to on the weekends. I had been a little nervous about coming here, because I am young and come alone, but it has never been a problem. I really enjoyed coming here, I learned a lot and met a lot of great people, and I would definitely come back. 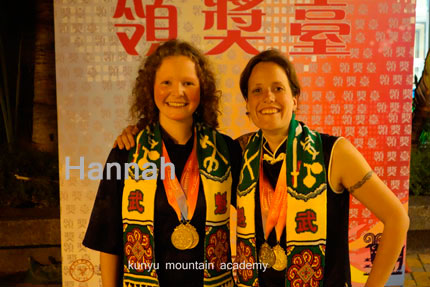 She took part in the 13th Chinese kung fu Competitions held by Hongkong,and got gold medal.