Shaolin Leopard Kung fu is also referred to as Leopard fist (Bao Quan in Chinese). It is one of the Five Animal styles of the Chinese Shaolin Kung fu. Leopard Kung fu was created by Jueyuan with help from Bai Yufeng and Li Sou. This style focuses on speed and angular attack. Naturally, the leopard does not rely on strength when fighting its enemies. This is also the case for the tiger. Both animals rely on speed to outsmart their opponents. 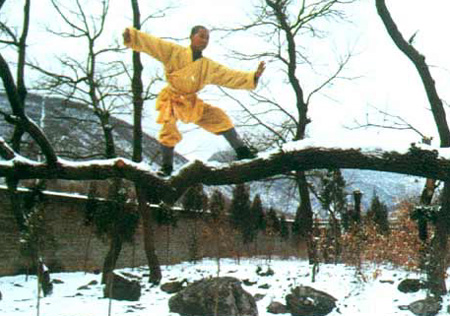 Although the power in all China Shaolin martial art forms comes from a solid stance,it is totally different for Leopard style.In this case, the power comes from the aggressive speed. Students who wish to study this style are taught how to focus on elbows, knees, low kicks, and leopard punches.

The creators of this style observed the movements of a leopard in the wild for some time before coming up with a concrete Shaolin style. The learners must therefore imitate these movements. The main focus in this style is actually attacking and not blocking.The style can be summed up with “Why block when you can hit?”

The relaxed, whip-like techniques allows the leopard to produce a lightning-fast and powerful force when attacking. Students practicing this style need to develop a flexible waist, which allow them to develop speedy footwork and explosive strikes.

The leopard fist if well practiced allows you to penetrate vital areas of your opponent’s body, such as the throat, solar plexus and groin. Students taking leopard training lessons are able to develop strong stable stances.