Five month Course from Jan to May 2016
David Robb     (England)
Coming to China To learn kung fu was always a dream of mine. It makes sense to study kung fu in the country of its origins.

I arrived in January 2016, it was pretty cold but the training keeps you warm. I studied wing chun under Master Guo and his disciple Ariel, the training was good and progressive, and the language barrier was not an issue as the translators were very good, plus Master Guo can speech enough English to make himself understood.

The training was hard but enjoyable. The master’s disciples Loc and Ariel were very good, always willing to help and “go the extra mile” in order to teach. The classes are also helped by the monitors, long term students, all of which are approachable and knowledgeable, Eldad, Sam, Clement, Yean and Jeremy all made me feel very welcome and at home.

The academy is situated in the kunyu mountain national park, an area of absolute beauty, with the Taoist temple just 20 minutes’s walk from the academy. Yantai city is an hour and a half journey from the academy. The city is very modern by the contrast of kunyu area and you can find anything you could need there. The training here has been hard, physically and mentally. it is a steep learning curve, but if you put the effort in, you will gain physical health benefits, such as strength and endurance as well as your newly acquired martial arts skills and a boost to your confidence.

I would suggest coming here to anyone I know as it would be a beneficial experience to anyone both physically and mentally. 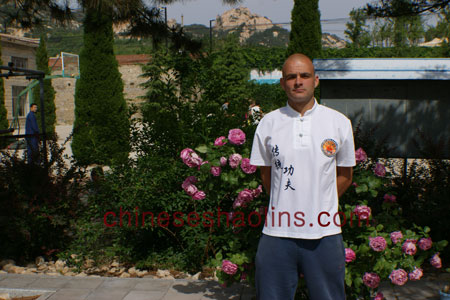