There is professional ancient Massage master in academy, Master Sui,inheritor of ancient massage skills and professional doctor,who has been working here full time for 5 years.Massage and acupuncture is old traditional Chinese culture and it is very popular in China.The ancient massage method is rich and profound. It is regarded as a special miracle in the Chinese medical field and he cured many patients. 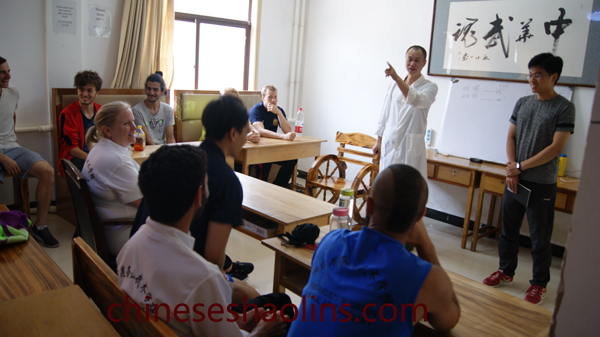 He has been influenced by family since he was a child. When he was young, he learned ancient massage from  aunt, not only theory but also a variety of techniques. He returned home and cured a lot of patients in the decade. His technical level was of a high caliber and continued to improve.

His master, Sui Zhuoqin, is his aunt (father’s sister). Her teacher is Liu Xizeng who was a famous massage doctor in Beijing and Tianjin in the middle of the last century. Master Liu’s master, An Cunru, once was also an abdominal massage master famous around the whole country. Master An had the same fame with four famous doctor at that time and many people used to call him Taoist An, meaning he used to stay in the temple and did some research about Taoism culture. (Master Sui graduated from medical school. Afterwards, she learned ancient massage with grand master Liu under the hospital’s arrangement. She was intelligent and hardworking, so Mr. Liu taught her lots of good techniques.

On account of the fact that the method was less known by people, hence before the 20th century, there was no relevant records of the theory, principles and methods about the old massage practice in Chinese medical history. Also because the ancient massage method was limited merely in some temples of Wutai Mountain and less used among people, despite its popularity among the royal family, therefore common people can't enjoy it.

The ancient massage method is distinguished from common massage, because it includes Qi and energy, taking advantage of the Qi of Dantian and correlating with the rhythm of the respiration, doing massage for the conception and governor vessels, which will regulate the five elements inside your body, the gold, the wood, the water, the fire and the earth. Meanwhile, it makes the internal organs, the veins and arteries fluent and circulates the blood and Qi in a normal state by the massage of the 12 veins and arteries.  In addition, it will achieve the purpose of physical health and the balance of Yin and Yang. Hence the massage will cure the disease and if there is no disease, it will keep a person healthy.

After the ancient massage, one may feel comfort in both the eyes and the ears. It will help make the internals organs stronger and the external circulations of the veins and arteries work well, so a person can have a healthier and longer life.

In the sixties and seventieth of last century, both of them used to work for famous officials in Beijing and Tianjin. For example, the Commander of the Beijing Military Region, major of Tianjin, and some other national leaders. He received praise from everyone he worked with. Grand master Liu used to be the private massage doctor for Liu Bocheng who was a famous Chinese army general.

Ancient massage is originated from Buddhism and Taoism. It attaches more importance to the combination of Qi and energy. Treatment mainly depends on the doctor’s heart, mind, Qi and energy combining with his vital Qi. It also can function in patients’ corresponding meridians, points or body parts, stimulate and adjust the patient's body essence and attack the patient's pathogens.

Because ancient massage is a kind of special “Qi-transforming massage” and “Qi Gong massage”, doctors need to practice everyday according to the technique characters and categories. Thus, we can improve health and accumulate the “energy” and “Qi” so as to supplement and make full use of the combination of them. Finally, it can improve the result of the treatment.

The main part of the ancient massage is the belly, the spine and human limbs are auxiliary. The main characteristics are: adjust gestural cavity and Qi-blood, dredge meridians, and provoke the function that patience can heal the injuries by themselves. It will expand and confirm the Chinese medicine because of the judgments, techniques and treatment. It provides a new way to cure evolving diseases. It is valuable. Ancient message has its own theoretic system and evolution. It also is called “live fossil of traditional massage”. Now ancient massage has become the national intangible cultural heritage project.

Students in the acupuncture class