Returning student from March to August 2017
Thibaut Salence      (Belgium)
Second time to Join us in Kunyu mountain.
I've been fascinated by Chinese martial arts since I was a child. I was captivated by the explosive yet graceful movements of Kung fu which not many other martial arts could live up to. I later enrolled in a Kung Fu school in Belgium for three years where I trained a style similar to Wing Chun. After finishing high school I went to college where I dropped out after 6 months. Then I tried searching for a job which didn't work out too well either so I decided to do something crazy and I came to China, the birthplace of Kung fu.
I became sharper in mind as well as more concentrated through the kung fu training in Kunyu Mountain. I gained more willpower from Qigong. Physically speaking I gained tons of strength, resilience and precision in my movements. I've also become more aware of where my limbs are when I can't see them.
.
My Master, Meng Shifu, was probably the biggest influence on my training as well as good friends who helped me with my Shaolin forms and Sanda, and pushed me further than I thought I could go during power training and power stretching.
Despite having trained Wing Chun before I came here I chose to train With the Shaolin groups. As I mentioned before I've always been fascinated by the explosive movements of traditional Chinese Kung fu. I also wanted just to try something else and I loved it from the beginning. The translators are kind as can get and are always willing to help you out if you have a problem and whichever group you're in your master will help you make your training count.
The surrounding of the academy are amazing all year round .Especially the spring and summer where all the plants and flowers are blooming. Every Friday afternoon we will do mountain training where we run up and down a part of the mountain right next to the nearby Taoist temple. And every few months we will climb the big mountain where you can take in the amazing view while training.
Email : Thibautsalence@gmail.com 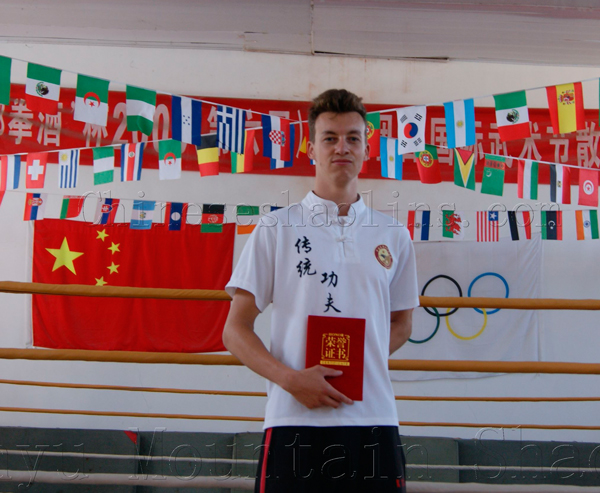 Thibaut is one of school excellent students in our academy.