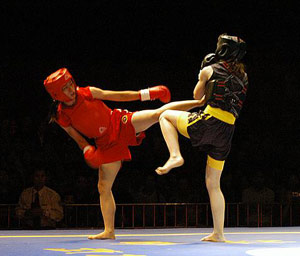 Sanda kickboxing is a type of kickboxing that originated from China. It means real fighting in English, but the natives refer to it as “technical combat” or “sharp hitting.” Practically, it involves two fighters engaging each other without any supportive equipment. This form of kickboxing is unparalleled and sets its own practical style. It blends the conventional fist forms of Chinese martial arts with the application of unique styles. During a fight, one can attack by way of hitting, wrestling, kicking, and controlling the opponent's body movement. The Chinese came to formally recognize Sanda kickboxing during the “National Technique Competition" held in 1979.

These are some pictures of Sanda Classes .Click it to enlarge for more : 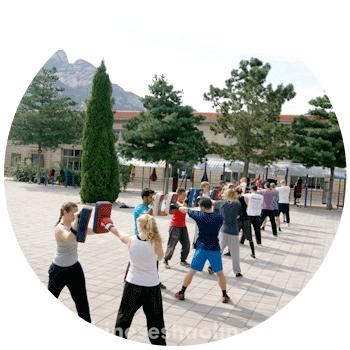 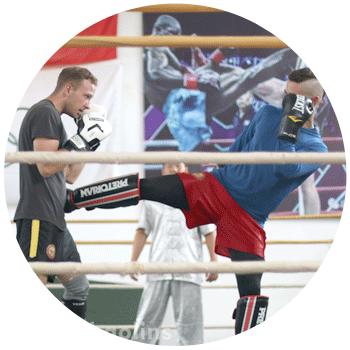 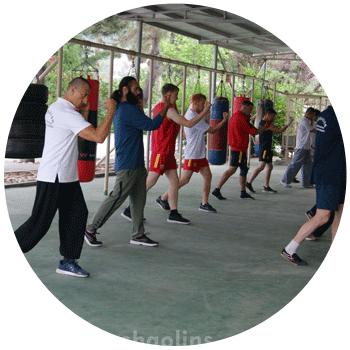 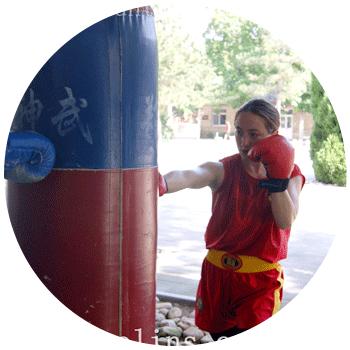 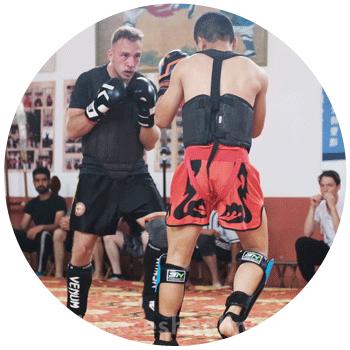 During a Chinese kickboxing event, one has to combine the right art of posing and proficiency.  A ready pose sets the fighter in a prepared mode to battle. Sanda can be used as a form of exercise to keep your body fit and flexible in such a way that one can make sharp automatic hits. The quick hits ensure one’s opponent has little or no chance of hitting back as he concentrates on trying to block. It a very effective technique and can be used for personal defense.Upon an engagement in a Sanda kickboxing match, one can either left or right pose depending on the preferred method.

The common left pose involves moving the left foot forward at a distance equivalent to the width of theshoulder from the toes of the right foot. The left foot should step flat firmly on the ground for stability while the right foot is elevated at a small angle from the ground. This posture ensures the chest is raised a bit while the stomach draws in backwards enabling the body to maintain stability during the fight.

To enable quick movements and easy blocking, the left arm is set backwards horizontally and bends at an angle of 90 degrees while the fist gets aligned with the lower end of the nose.  The right arm should also surge backward bend roughly at 45 degrees. The priority of one’seyes should be set on the opponent’s upper body.While fighting or practicing, the clenched fist, knee and the step movements must always be utilized to ensure a fight can wrestle, defend, and attack. Whether the right pose or left pose is in play, the same concept applies.

Making firm and quick steps in any direction enables you to shift the body position. This is vital in maintaining body balance and enables easy defending and making diverse and quick attacks. In Sanda, there are nine commonly used steps:  Ji, Gai, Cha, Cekua, Nei, Dian, transferred step, forward step, and backward step..

Defending yourself is the ultimate purpose of training in Sanda. You must protect yourself to avoid being hit or badly injuredby the opponent. Maintaining a firm yet flexible pose gives you the opportunity to hit and defend at the same time. A defensive movement should always be followed by a counter attack.

A fist has to be clenched and surged in way that it has a maximum effect on the opponent. It must be firm, targeted, and fast enough not to miss or be blocked. The common fist movements are straight fist, hookingfist, swing punch, and the whipping fit. All are applied in different scenarios and dependent on the posse of your opponent. Combining the quick step movements with sharp quick fists can is very effective in defeating your opponent.

Leg hits can be very effective especially if the adversary is at a distance that hinders the efficient application of the fist. However, the leg has to move very fast with a lot of strength and target a definitivepart of the of the opponent’s body. One can make a sweeping move, sway the straight leg, or stretch it forth. Combining the step and leg movements can be deceptive and very effective in hiding your intended hit.

In Sanda Chinese kickboxing, wrestling is used to take down the adversary. This gives the fighter an advantage as the opponent can only make minimal moves with his hands and legs. Witty, subtle and quick movements of the step and leg must be made to prevent room for defensive action.

Knee movement is one of the most powerful hits that can be applied. This skill is very effective whenhitting the head, abdomen, or chest of your opponent. However, it can only be effective in a close fight

Perhaps this is the most effective way of defeatingyour opponent. Constant attack consists of quick, relentless, and coordinated hand, leg, and knee attacks. This confuses the opponent as he tries to defend the assault targeting different parts of the body. You then have control over the adversary and you can make an ace hit easily.

Practicing Sanda gives a competitive edge both in martial arts and real battle.Learning Sanda  from our Chinese Shaolin kung fu masters can be very useful for protection and self- defense.It distinguishes your ability and enhances strength, sharpness, bravery, and skill.